Home Android Development Learn to use Android NDK in Linux

Learn to use Android NDK in Linux

July 13, 2013Raj AmalAndroid Development10 Comments
In this post we are going to see how to use Android NDK in linux. NDK is Native Development Kit. The NDK is a toolset that allows you to implement parts of your app using native-code languages such as C and C++.
In this tutorial I use Ubuntu linux 13.04 distribution.

1.Existing libraries in native language such as C/C++ can be used.
2.Performance of the app is increased.
3.It is almost impossible to decompile the app and to get the original code. 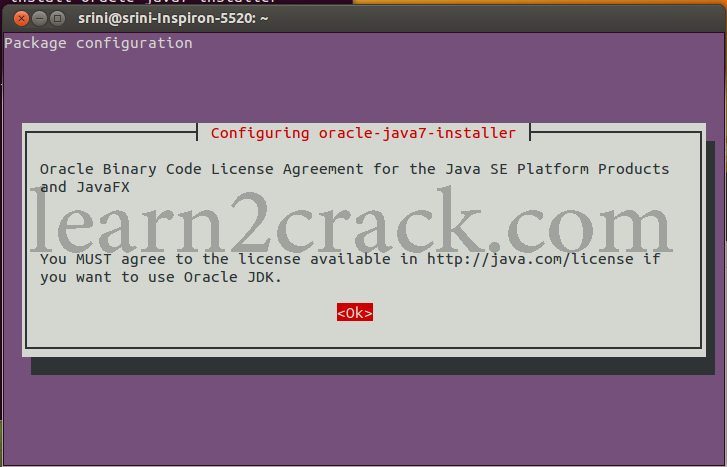 Here I am using a 64bit linux operating system. In order to support the 32 bit libraries we need to install a special library called ia32-libs.To install enter the following code in the terminal.
sudo apt-get install ia32-libs

ADB is Android Debug Bridge. It can be used for debugging purposes. In order to use ADB in Ubuntu enter the following code in terminal. ADB will be downloaded and installed.

1.Extract the contents from the downloaded “Android NDK” and “ADT” archive to your home directory.
2.Now we are going to export the path of NDK as a variable.
i)Open the terminal
ii)Enter the code in the terminal and hit enter
gedit .bashrc
iii)A text editor opens, Place the following code at the end of the file and save it.

Note:Replace with your username.
Now you have basically set up Android NDK.

Let us see some examples given with the Android NDK package. The examples are placed in the “samples” folder of “android-ndk-r8e” folder.
1.Now open “eclipse” from /home/username/adt-bundle-linux-x86_64-20130522/eclipse directory.
2.ADT will open now.Now lets see how to compile Native C/C++ program with NDK 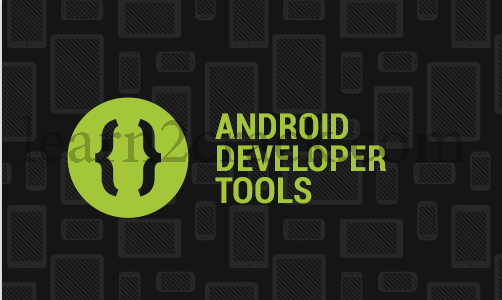 3.Now import the sample program by selecting File->Import, then select Android->Existing Android Code Into Workspace, then select hello-jni from samples folder of NDK and then Finish. 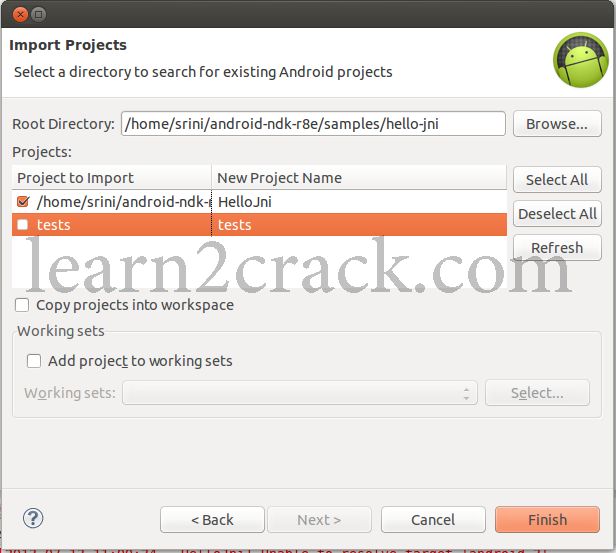 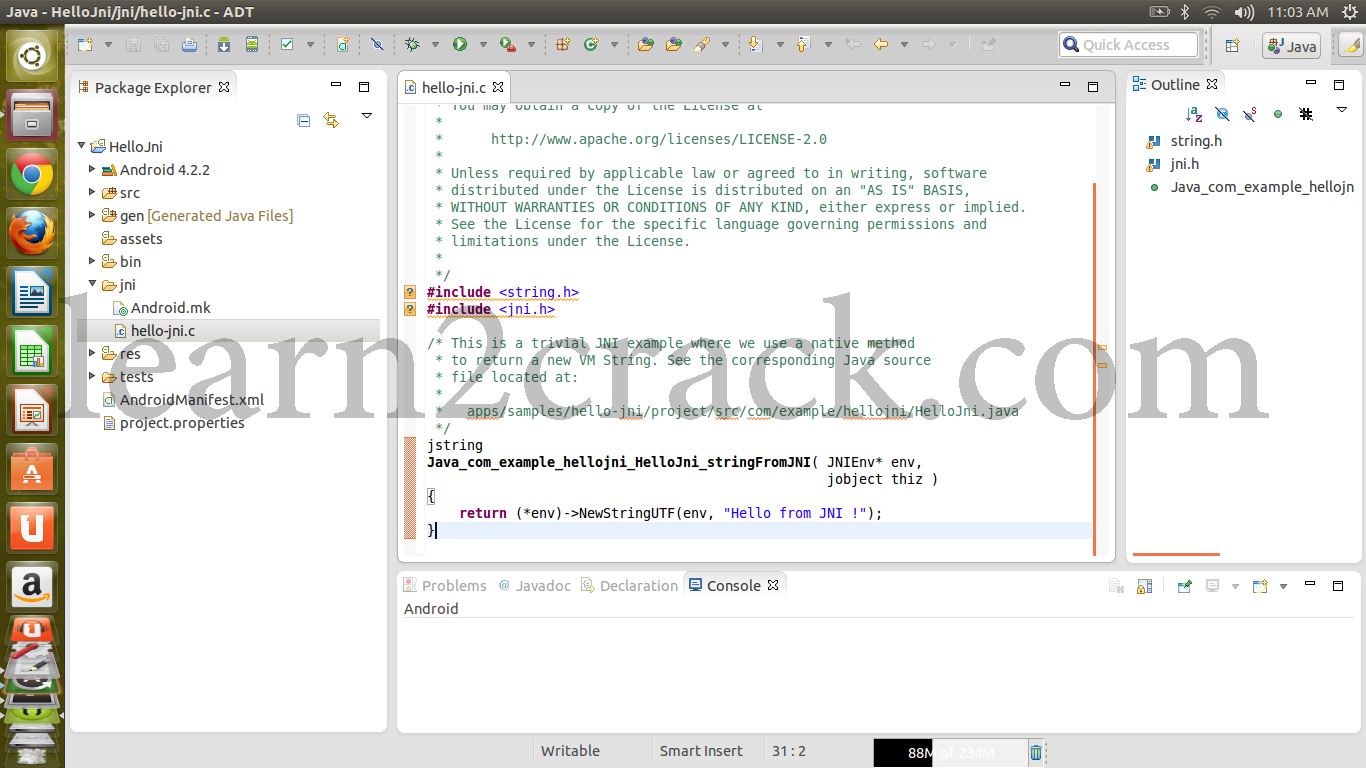 6.In order to compile the native code open the terminal and navigate to hello-jni folder.
7.To compile enter the following code in the terminal. 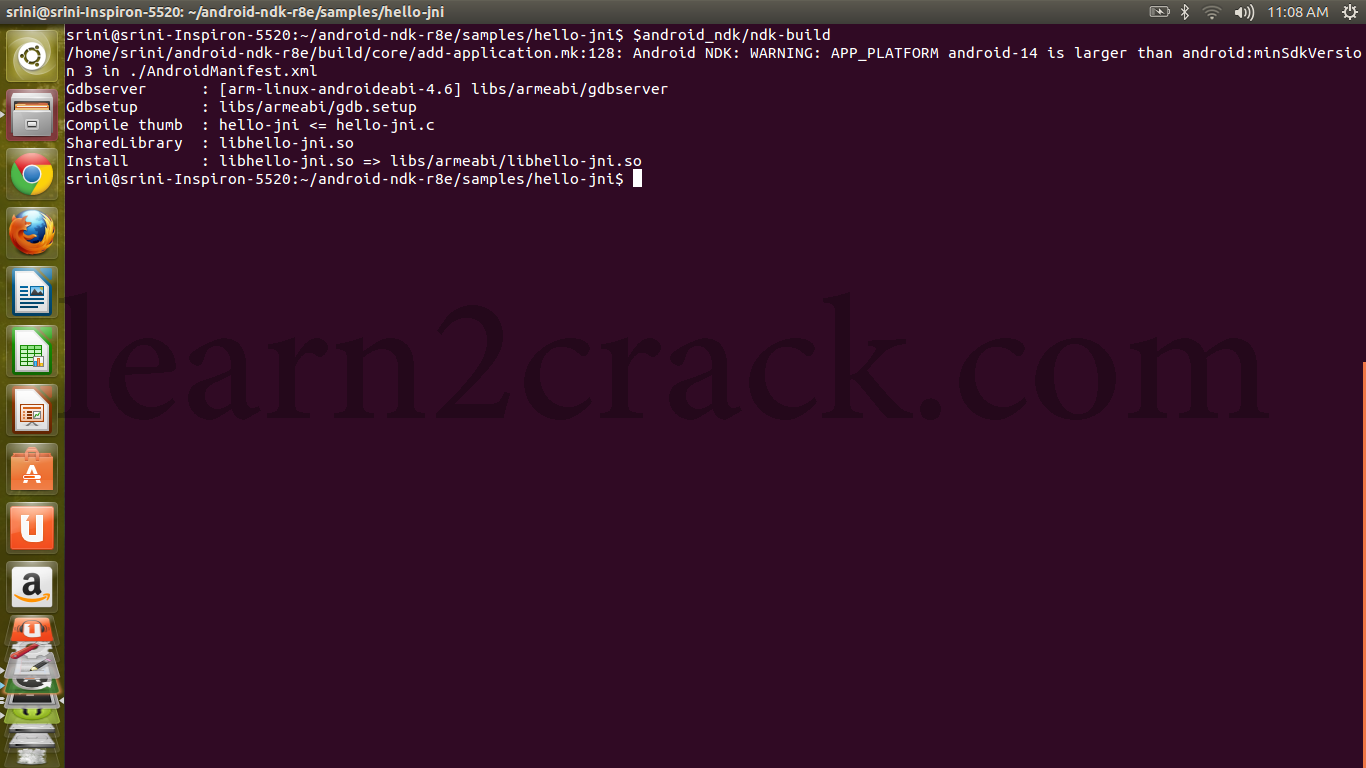 If compilation is success you will get a library file “libhello-jni.so”
8.Now refresh the project in the Package Explorer in ADT, the library file is located in libs->armeabi folder. 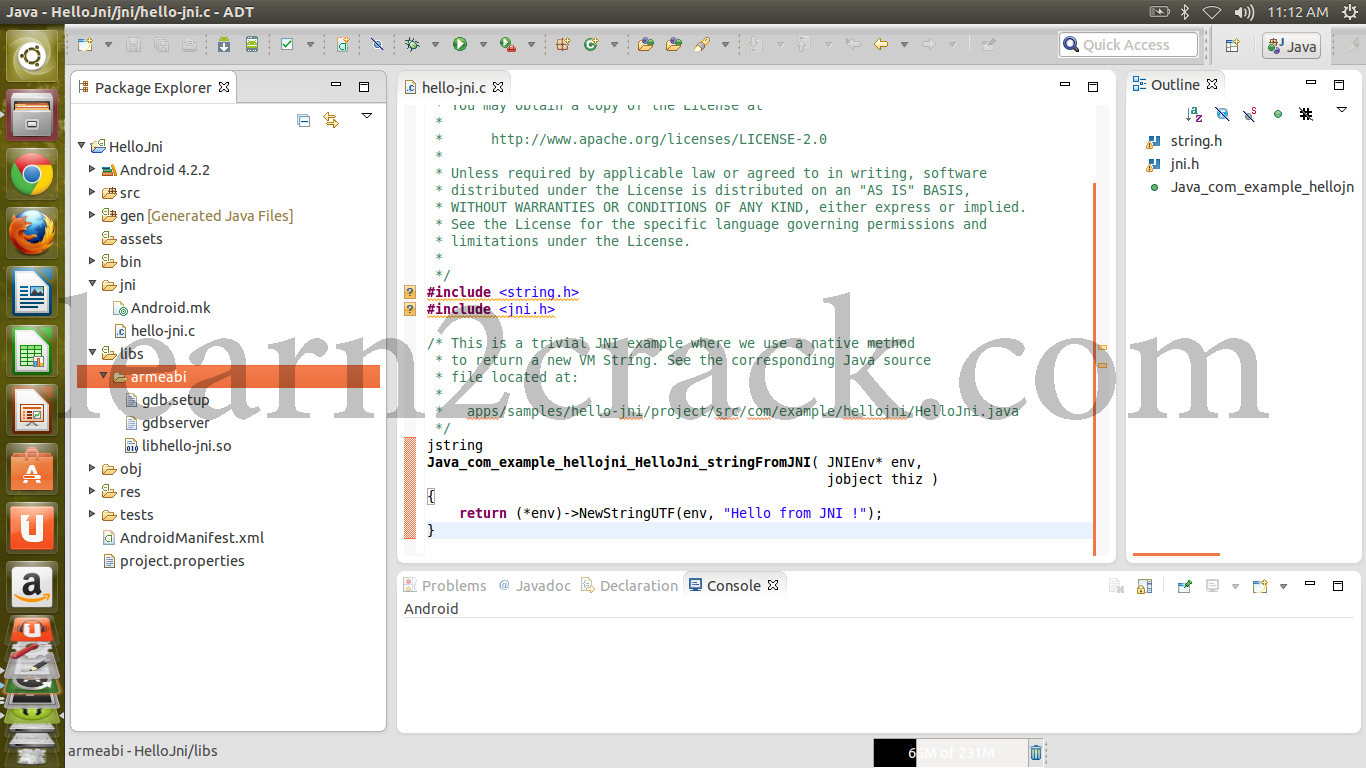 9.Finally we are going to test our application in the emulator. Start the emulator and run the project. 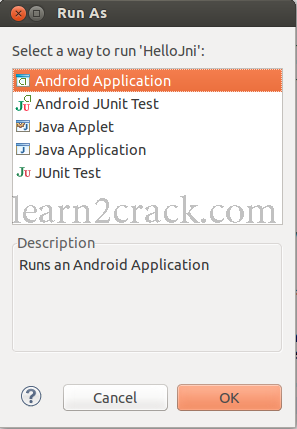 10.Our application will be installed in the emulator. 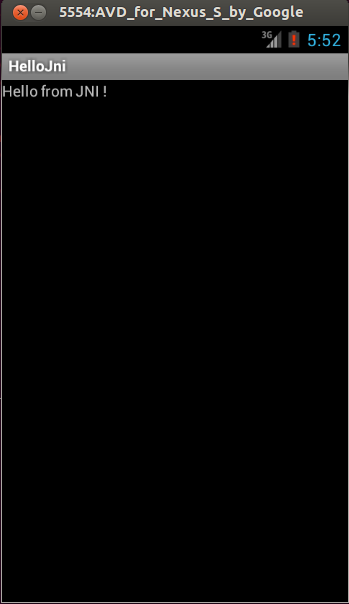 11.Lets make some changes in the native code. I have replaced the string as “Hello this is learn2crack”. 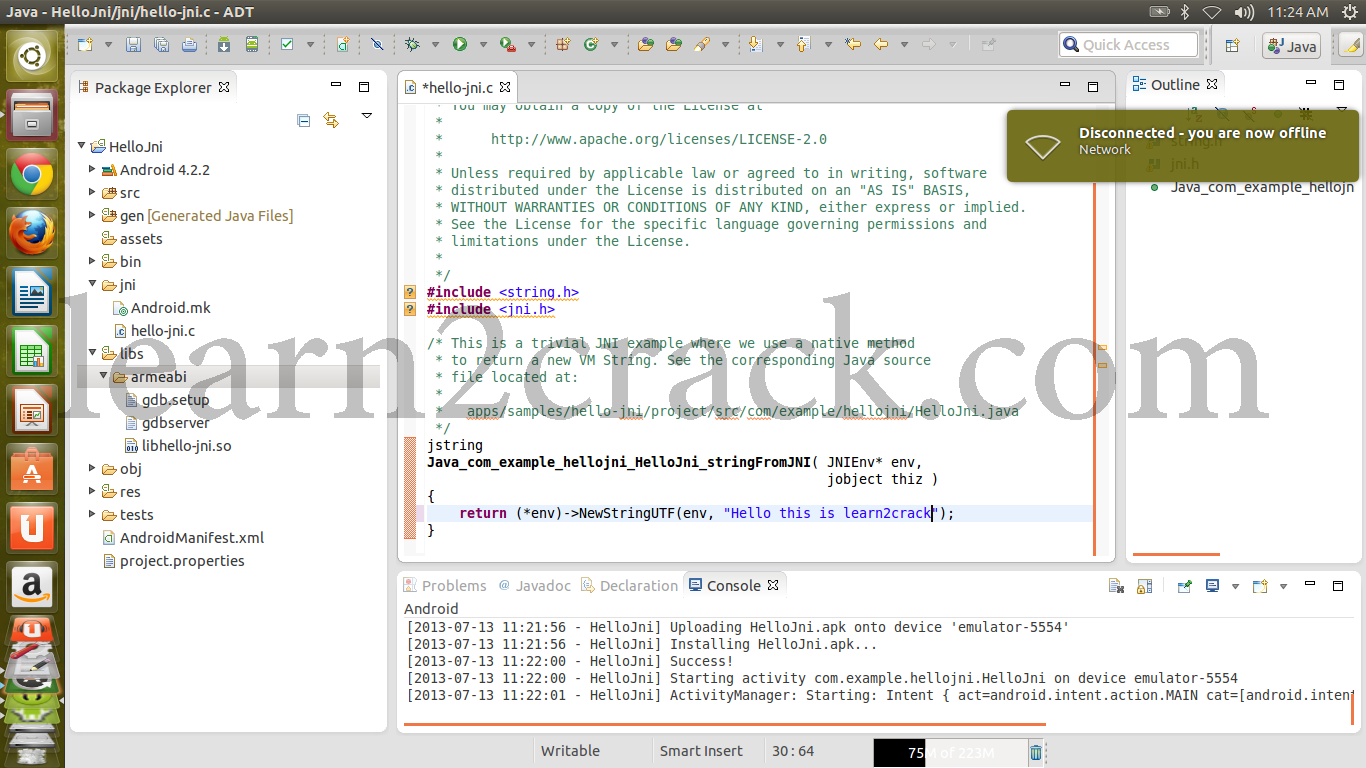 12.Now recompile using NDK and clean the project and then run in the emulator.Its working.. 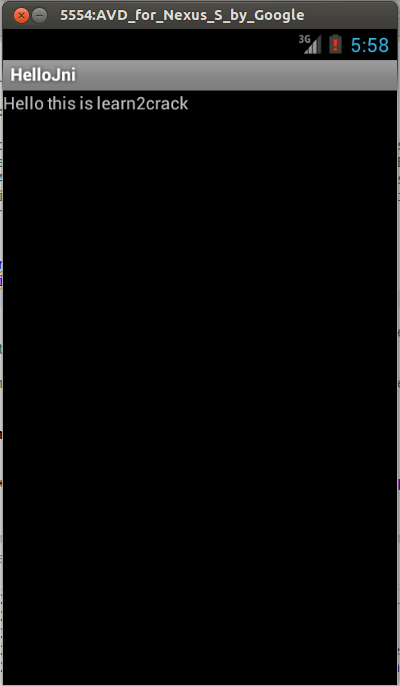 : Android NDK, Linux
Next Post How to Develop a Android PhoneGap Application from Scratch

How to Transfer files between Linux PC’s using Terminal

How to use telegram in the browser and desktop(PC)